Alexander Suvorov. Biography of the Commander

Alexander Vasilievich Suvorov was born on November 13 (24), 1729/30 in Moscow, in the family of the Ensign of the Life Guards of the Preobrazhensky Regiment Vasily Ivanovich Suvorov. His grandfather, Ivan Grigorievich, was the general clerk of the Preobrazhensky order, who was in charge of political investigations. Suvorov’s father, Vasili Ivanovich Suvorov (1708-1775), started his military service as a batman of Peter the Great, later held prosecutorial posts, took an active part in the 1762 overturn, was highly trusted by Catherine the II, and rose to the rank of general-anshef. History lacks the precise information about the year of A.V. Suvorov’s birth. Some historians adhere to the 1730, others consider the 1729 more correct on the basis of a number of documents.

Suvorov was married to the Princess Varvara Ivanovna Prozorovskaya (1750-1806) and had two children: a daughter Natalia (1775-1844), who he affectionately called “Suvorochka” whose married title was Countess Zubova, and a son Arkady (1784-1811) – Lieutenant-General who tragically died during the crossing of the Rimnik river.

Alexander Vasilievich Suvorov possessed the titles of: the Rymnikovsky Count, Italian Prince, Count of the Holy Roman Empire, Prince and “Cousin” of the King of Sardinia and Piedmont. He was a knight of the many Russian and foreign orders (Prussian Black Eagle and Red Eagle, Sardinian Holy Annunciation and St. Mauritius and Lazarus, Austrian Maria Theresa’s, the Bavarian St. Hubert, and the French St. Catherine the Virgin).

In 1742 Alexander Vasilyevich was filed as a Private in the Life Guards Regiment of Semenov, but he studied sciences at home until 1748 after which, as a corporal, he began active service in the regiment. In 1754 he was released into the army with the rank of lieutenant; participated in the Seven Years’ War.

In 1762 Suvorov was promoted to the colonel and until 1768 commanded the Suzdal Infantry Regiment, developed the famous “Regimental Institution.” In 1769-1772 he participated in the war with the Polish Confederates (victories at Orekhovo, Landskrona, Stolovichi), in 1770 was promoted to Major-General. During the 1773-1774 years, under the command of P. A. Rumyantseva, Suvorov participated in the First Russo-Turkish War (victories under Turtukay and Kozludzhi). In 1774 he was promoted to the lieutenant general, took part in the capture of Emelian Pugachev in the Volga region. From 1776 to 1779 he commanded the Russian troops in the Crimea and the Kuban, ensuring the accession of these lands to Russia, in 1780-1781 he did the same in Astrakhan. From 1782 to 1784 commanded the Kuban corps, suppressed the Nogai uprising. In 1786 he was promoted to the general-anshef, participated in the Second Russian-Turkish War of 1787-1791 (victory at Focsani, Rymnik, capture of Ishmael). In 1792-1793 he commanded the troops in Finland, then in 1793 -1794, in Ekaterinoslav province and Tauride region. Participated in the Polish war of 1794 (victory at Brest and the capture of Warsaw), promoted to the general-field marshal. In 1795 Suvorov commanded the army in Poland, in 1796-1797 in Ukraine where he completed his military theoretical work, which was later named the “Science to Win.” Due to the divergence of views on the army reform, Suvorov and Pavel the I entered into a conflict, and until 1799 Suvorov was in exile in his Konchanskoe Novgorod Province estate. In 1799, under Suvorov’s leadership, the allied Russian-Austrian army liberated Italy from the troops of Republican France (victories at Adda, Trebbia, Novi), with the Russian army made the Swiss campaign trip (capture of St. Gothard, Chertov Bridge, victory at the Muttental). On October 28, 1799, Emperor Pavel the I elevated Suvorov to the rank of the Russian Generalissimo. Returning from the campaign, Suvorov fell seriously ill and died in St. Petersburg on May 6 (18), 1800 in the apartment of his relative Count D.I. Khvostov. Today this apartment is located in the house numbered 23 on the embankment of the Kryukov Canal. Suvorov was buried in the Blagoveshchenskaya burial vault of the Alexander-Nevsky Lavra.

1742, 22 (2) of November – Enrolled in the l. – G.W. Semenovsky regiment as a soldier in excess of the already completed composition.

Got a vacation to learn “hard sciences” in the parents’ house.

1756, 17(28) of January – Defined as the Chief Provinant Master of the Captain’s Rank and appointed to serve in Novgorod.

1756, 28 of October (8 of November) – Appointed as a lieutenant-auditor-general to the State Military Collegium.

1756, 4 (15) of December – Appointed as a lieutenant-auditor-general to the State Military Collegium.

1758, 9 (20) of October – Promoted to the lieutenant colonel with the appointment to the Kazan Infantry Regiment.

1758 – Appointed as the commandant of the city of Memel.

1760 – Was the general person on duty during the General-Anshef V. V. Fermor command.

1761, July – Appointed as an Acting Chief of the Cavalry Corps Staff of the Major-General G. G. Berg.

1761, July-December – Commanded a cavalry squad in battles near Reichenbach, Golnau, and Neigarten.

1764 – 1765 – Developed the “Regimental Institution” – an instruction of the order of service and military training in the regiment.

1769, 15 (26) of May – Sent to Poland as the head of an infantry brigade to take part in the hostilities against the Barskoy Confederation.

1773, February-March – Was going to the border areas with Sweden with a secret mission.

1774, September – Persecuted the rebel troops, and then the escorted the captive E. I. Pugachev to Simbirsk.

1778-1779 – Commanded the Crimean and Kuban corps, led the resettlement of Christians from the Crimea.

1780, 11 (22) of January – Appointed to Astrakhan to prepare a military expedition to the Persian khanates.

1780, April – Church reconciliation with his wife.

1783, June – Led taking an oath of allegiance to Russia of nomadic Nogais in Kuban.

1784, April – Appointed as the commander of the Vladimir division. Final break up with his wife.

1784-1785 – Lives in his estates near Vladimir and Suzdal. Visited s. Konchansky of Novgorod province for the first time.

1786, 22 of September (3 of October) – Promoted to the senior general in accordance to the seniority principle and appointed to the Yekaterinoslav Army of General-Field
Marshal Prince. G. A. Potemkin.
1787, August-September – Manages the defense strengthening of the Kinburn-Kherson battle area.

1787, 1 (12) of October – Defeated the Turkish troopers on the Kinburn Spit. Was wounded twice during the battle.

1788, June – Participates in repelling the offensive forces of the Turkish fleet on the Dnieper-Bug estuary.

1788, 27 of July (7 of August) – Wounded with a bullet in the neck while repelling the outcry of the Ochakov fortress garrison.

1789, 26 of September (7 of October) – Awarded a golden sword with diamonds and the inscription: “The Winner of Vizier.”

1790, 25 of November (6 of December) – Appointed as the commander of the troops under Ishmael.

1791, 25 of March (5 of April) – Selected lieutenant-colonel of the Life Guards of the Preobrazhensky Regiment; it was ordered to knock out a medal in his honor; The Senate
was instructed to draw up an honorable mention with a list of his exploits.

1792, 8 (19) of August – Appointed as the commander-in-chief of the Finnish division, the Rochenzalm port, and the Saima flotilla.

1792, 10 (21) of November – Appointed as the commander-in-chief of the troops in Ekaterinoslav province and Taurian region.

1794, 24 of October (4 of November) – Took control of Prague by a military assault, a fortified suburb of Warsaw.

1795, spring-summer – Completed his military-theoretical work, later known as “the Science of Wining.”

1795, December – Trip to Finland to inspect the border fortifications.

1796, April-November – Commanded the army in the south of Russia with the main residence in Tulchin

1796, 24 of November (5 of December) – Appointed as the commander of the Ekaterinoslav Division.

1798, end of February-March – Stay in St. Petersburg due to the invitation of Emperor Pavel the I.

1799, 6 (17) of February – Received a letter from Emperor Paul I about the desire of the allied monarchs to delegate the command of the anti-French coalition troops in Northern Italy to Suvorov.

1799, 28 of October (7 of November) – Raised to the rank of the Generalissimo of all Russian troops. 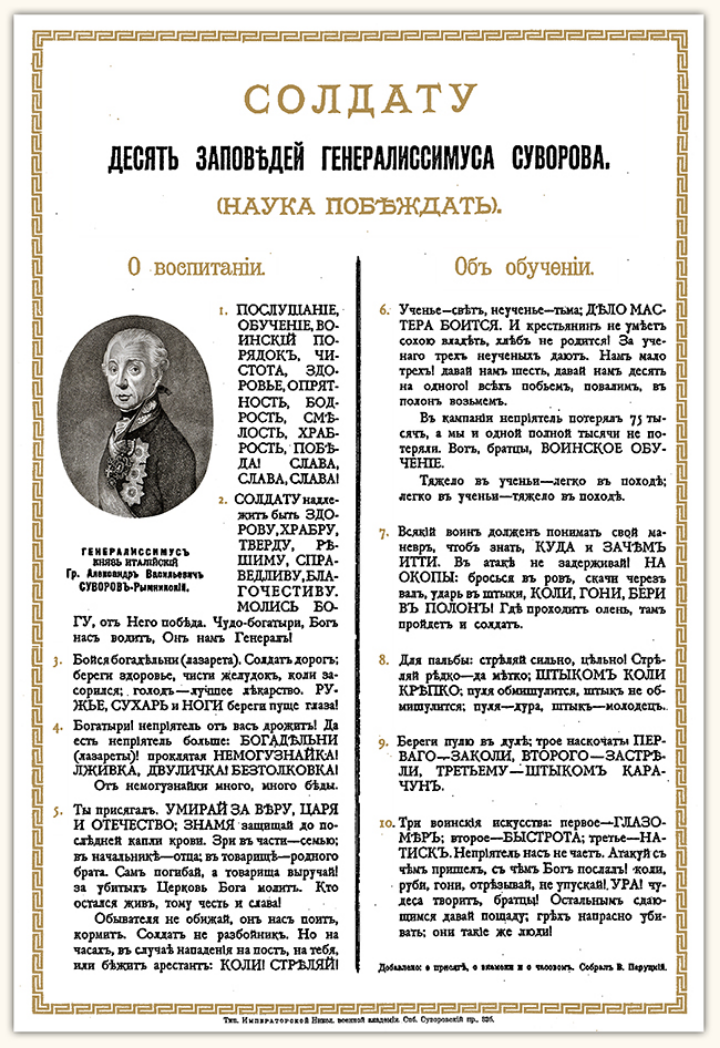 What to read about Suvorov and his time

Anting I.F., The victory of Count Alexander Vasilyevich Suvorov-Rymnikovsky, or his Life and military actions against Prussia, Turkey, Poland and France, with the addition of some of his letters and anecdotes showing the character and genuineness of this great man. M., 1809
Suvorov Alexander Vasilievich (1730-1800): Inventory of documentary materials of the archive fund. M., 1952
Description of the collection of hand-written materials Alexander Suvorov. L., 1955
Fuks E.B., The history of the Generalissimo, Prince of Italy, Count Suvorov-Rymnik. M., 1811
Fuks E.B., The history of the Russian-Austrian campaign of 1799 under the leadership of the Generalissimo of the Prince of Italy, Count Alexander Vasilyevich Suvorov-Rymnikovsky. St. Petersburg, 1826